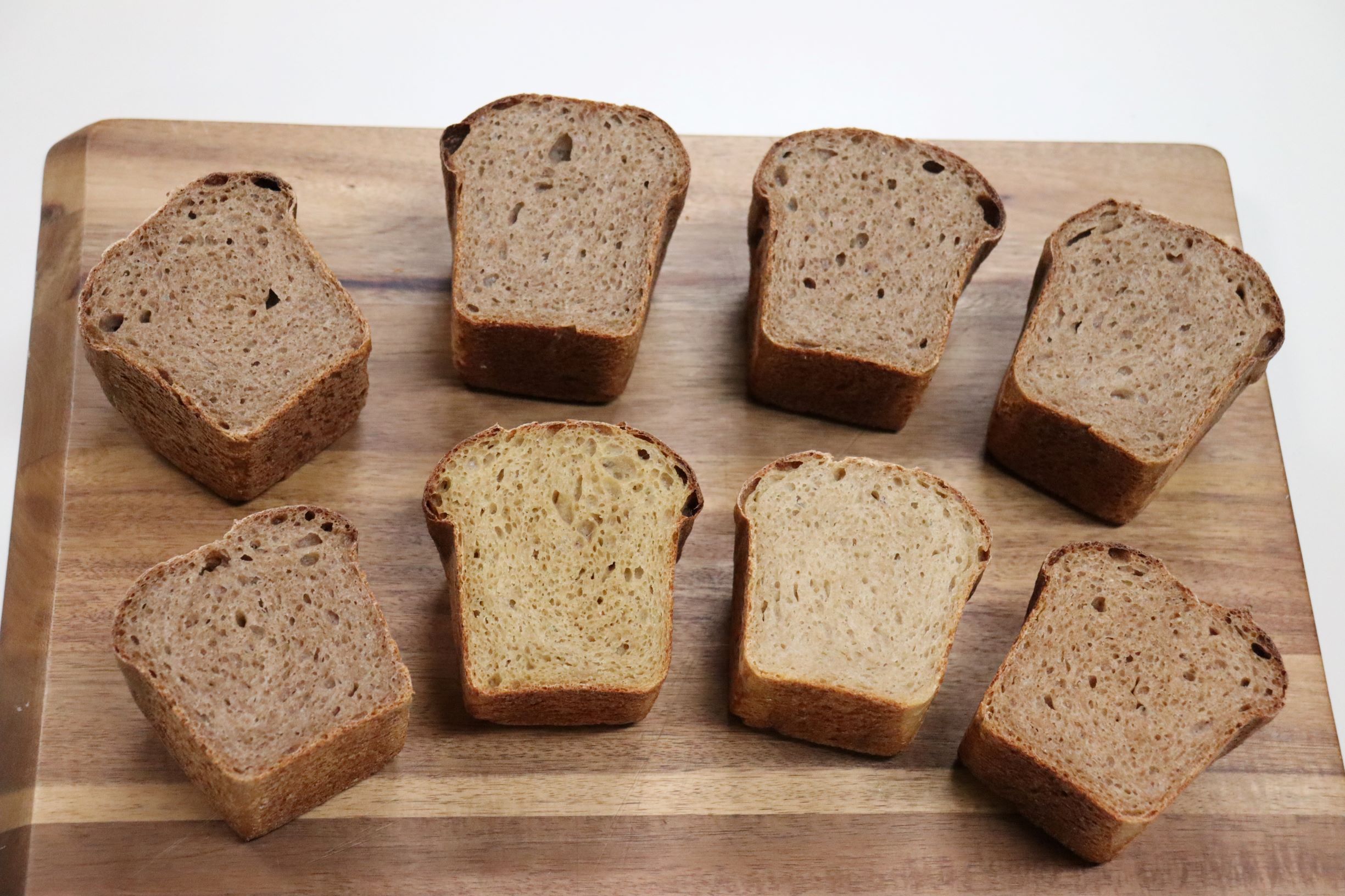 Simple whole wheat sourdough is essentially a mixture of stone ground organic whole wheat flour with water, that has been allowed to ferment using only those microorganisms that are naturally present on the grain, and in the air.

Sourdough has the power to leaven and flavor all kinds of whole grain bread, and to preserve and flavor such products as whole grain pasta and crackers. At the same time sourdough will make bread more nutritious, and more storage stable, than when made with baker’s yeast, or baking powder. For example, the acidity allows the action of naturally occurring phytase in whole wheat, to break down phytic acid and release valuable minerals. Acidity will discourage the growth of contaminating fungi and so preserves the bread longer, from turning moldy. Vitamin B1 (thiamine) in the whole grain flour is preserved in the bread as a result of the acidic dough.

The sourdough yeasts and bacteria are fed with sugars released from the starch and soluble fiber in the whole wheat flour, by the action of the naturally occurring enzymes in whole wheat and those of the yeast and bacteria. Malt is used to supplement these enzymes, especially when the wheat has been grown through a dry summer, such as in California. A valuable advantage to sourdough leavening of bread is that these simple sugars are removed by the fermenting micro-organisms. As a result, the amount of easily digested carbohydrates is reduced in comparison with unleavened breads or breads produced with baker’s yeast or baking powder. This makes sourdough fermented whole grain breads useful for people who are in a pre-diabetic or diabetic state, who need to reduce their intake of the most highly digestible carbohydrates.

In order to produce a sourdough for the first time, microorganisms naturally present in the air and in organic whole wheat flour, are allowed grow in a mixture of the flour with water. Initially there is competition between many types of microorganism, some of which are harmful. Eventually the lactic bacteria will reproduce sufficiently to make the mixture every acidic or sour, with a pH 3.5, which kills and excludes the harmful bacteria. Only some specialized yeasts remain, which are compatible with the lactic bacteria and can withstand the acidity. The sourdough microorganisms are primarily yeasts and lactic bacteria. If the whole wheat flour and water mixture is left at room temperature for several days, eventually the growth will be sufficient for the microorganisms to crowd each other out from the remaining supply of food. At this point the gassing in the sourdough will cease, and the mixture can be regarded as saturated with sourdough microorganisms. This saturated sourdough is effectively a starter with a consistent potency, because approximately the same number of microorganisms will always be able to exist in this saturated system. Once saturated in this way the mature sourdough can be refrigerated to preserve the microorganisms.

In order to replenish the supply of these microorganisms, a small amount of mature sourdough is added to a new mixture of stone ground organic whole wheat flour and water.

Stirring the sourdough brings air to the yeasts that need it. The rest time between stirring, when the oxygen supply is low, favors the growth of the lactic bacteria. Portions of this mature (saturated) sourdough can then be used to make breads and pancakes for up to 4 weeks. Ideally, for the best leavening action and flavor only a one week supply is made with each replenishment.

Fermentation is highly sensitive to temperature so that sourdough refreshment to a mature sourdough, may take just one day in the heat of summer and yet it will take three days in winter. The general rule is that the sourdough fermentation will be 2 to 3 times faster if the temperature rises by 18ºF (10ºC). This temperature connection to speed of fermentation, applies both to sourdough starter and to sourdough bread dough. The favorable temperature range to encourage the appropriate microorganisms is 68 – 86 ºF (20– 30 ºC).

Although whole wheat flour and water alone can be used to make a sourdough, the recipes below suggest using additional, enzyme active malt, vitamin C and salt. These can all be present in sourdough bread dough and provide an improved environment in which the microorganisms can thrive.

[] Mix whole wheat flour and water in a bowl large enough to allow for expansion of the sourdough as it forms. Cover with a plate, and leave at room temperature preferably 68 – 77 ºF (20 – 25 ºC). Initial pH is greater than 5. If you are adding malt or finely chopped sprouts, first mix them with the flour, and if you are adding salt first dissolve it in the water.

[] Stir the fermenting sourdough at least twice daily, e.g. morning and evening. After 2 – 3 days the aroma should mellow and the initial bubbliness should subside. If you are testing with acidity test paper the pH should eventually be 3.5.On day 4 the gluten thins and there is a tendency for the solids to settle out and leave a watery upper layer. A thin layer overgrowth of yeast may form on top of the watery layer, especially if the mixture is left undisturbed for 12 -24 hours. This can be stirred back into the mixture.

[] On approximately day 5, provided all the previous stages have been achieved, the sourdough can be used as a mature sourdough starter to make bread. Stir any separated water back into the sourdough; stir and mix well before using. Store in a covered narrow jar, at 40ºF (4ºC). Replenish the sourdough starter after 2-4 weeks storage, or when the supply is running low, or you anticipate a need.

[] Separately measure water. Optionally add salt and dissolve it completely. Add the mature sourdough and disperse evenly in the water.

[] Add the water mixture to the flour. Mix well until evenly incorporated. Cover with a plate. Leave to ferment at room temperature preferably 68 – 77 ºF (20 – 25ºC).[] Stir the fermenting sourdough at least twice daily. Notice the aroma and degree of bubbliness, which is usually greatest after 8 -12 hours. Allow the fermentation to continue until after stirring and waiting 8-12 hours, very few new bubbles appear, the aroma has mellowed and the texture has thinned; this usually takes24-48 hours. If testing with acidity test paper the pH should be 3.5.

[] After a further 12-24 hours, a watery layer may separate on top and may acquire a film of a yeast overgrowth. This is now mature sourdough, ready for use in bread or to be stored for later use.

[] Store mature sourdough, covered, at 40 ºF (4 ºC). The sourdough is best stored such that it fills a narrow jar, and can be covered with a loosely fitting screw cap lid. In this way, the risk of surface contamination is much reduced. Stir well before measuring out for a recipe. Use within one week preferably, although the mature sourdough should remain useful for up to one month.

[] Use the previous batch as the source of mature sourdough for replenishment. Regular weekly replenishment is best to maintain the leavening strength and good flavor of the starter.